Amsec Gun Safes: Owning a firearm in the United States is a constitutional right which everyone can embrace. However, putting such dangerous weapons into the hands of citizens requires strict measures to ensure that no one picks up their gun and shoots others. One of the requirements is to have a safe keeping place for the guns. Not just away from the children, but also away from the fidgety fingers of thieves to ensure that they do not break into your home and use your own guns against you. There are many ways one can keep their guns out of sight.

American Security has been in the business of designing and manufacturing safes at a high quality for a long time. A typical amsec gun safe will ensure that the guns are kept in a safe location and away from prying eyes and fingers. Some of them include; 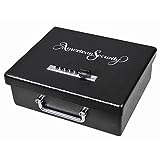 A look at the gun safe reviews on the internet reveals that American Security leads in many areas. Most of its gun safes withstand most prying efforts without giving out the contents to the burglars. A notable safe from amsec is detailed below.

Gun safes and other types of secure locking containers are rated according to their level of strength and how they can withstand fires and prying. Among the classes for gun safes include;

The use of biometrics in providing security has been advanced so much that, today, it is considered the safest method. Safes from firms such as amsec are being produced using biometrics such as fingerprint and iris scanners which only work when the specific individual is available. Among them are:

Other important gun safes that come with a fingerprint reader are detailed below.

One can obtain a good gun safe at a fraction of the price the new safe could cost. Care has to be ensured, however, to ensure that the safe works as required and is not just a piece of metal box.

American Security has been in the field of manufacturing safes both for guns and other items for over 60 years. Although other firms such as GunVault and BARSKA have come up strongly in this field, they compare dismally to amsec. For the most part, amsec vaults come with the best features on the market. Amsec does not focus on the low-end segment of the market. Rather, it focuses on providing the most premium of gun vaults and safes for its customers. Evidence of this aspect can be found in the fact that it is among the few firms with UL 1037 vaults.